A fresh spin on a classic design

Jennifer Richinelli
KEYWORDS Danby Marble / natural stone / white marble
Order Reprints
No Comments
Featured in our Industry News section of this edition of theStone & Tile Design Insideris a story about the unveiling of "The Guardians: Hero and Superhero," which are two 13-foot-high statues that were created by acclaimed Italian architect and designer Antonio Pio Saracino. The statues were recently installed outside Bryant Park in New York City and unveiled during a reception attended by hundreds of people. I had actually been invited to the event, but due to bad weather, I unfortunately couldn't attend. My publisher, Alex Bachrach, was able to make it into the City that night and told me that the statues were spectacular. 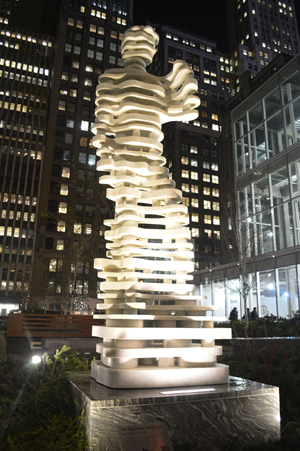 "Hero" was designed as a modern-day take on Michelangelo's famous "David." Weighing 6,000 pounds, the large statue is made from Olympic White Vermont Danby marble. "I wanted to create two symbolic protectors of New York City that celebrate the superhuman and the inspiration that it channels," Saracino said. "Their layered design, shows 'the universal ability of mankind to cement its own presence in the world with its perennial construction skills.'"

ABC Stone of Brooklyn, NY, supplied the Vermont Danby marble and Union Marble fabricated the statue. Precision Stone, Inc. of Westbury, NY, provided the drafting, project development, coordination and installation.
The statue's design is definitely unique, and it is evident that a lot of thought and details went into the design. "The level of complexity of making the over 170 different shaped pieces that make up this statue -- with exact tolerances -- was no simple task," explained Jonathan Tibett, proprietor of ABC Stone and Precision Stone. "To achieve proper balance and proportion we went through many levels of computer generated modeling to ensure symmetry, balance and structural integrity."

What's nice about a project like this is that it was a team effort between the architect, stone supplier, fabricator and installer. Because of all the intricate components, communication was crucial for a successful installation.

"The Guardians: Hero and Superhero" will remain outside Bryant Park indefinitely, so if you are in the neighborhood, it would be worth a visit. I know I plan to take a trip into New York City soon to see this modern take on a classic design.

A Fresh Concept in Stone Fabrication

Do you have a winning design?

Taking a chance on a â€œsmall townâ€ shop