Are You Ready for Digital Templating?

Last month, a virtual Stone Summit was held to discuss why transitioning to digital templating is a beneficial step to operating a successful fabrication business

Technology continually drives efficiency and quality production. Particularly for the stone industry, advances in technology attribute to fabrication of intricate custom pieces, high-volume production, organization and even offer a solution to labor shortage. There are a diverse range of digital solutions to assist fabricators in their production process, including automated machinery and management software programs. Moreover, laser templating has grown tremendously in popularity over the years. Recently, the Natural Stone Institute, in partnership with Stone World, held a two-day virtual Stone Summit, sponsored by MSI, to discuss this topic.

Mark Meriaux of the Natural Stone Institute moderated both sessions. Among the panelists who participated on both days were JT Hoffman of Laser Products Industries, Jordan Mann of Flexijet, Zach Harris of Prodim USA and Ralph Chapman of Creative Stone Accessories. Paul Getz of Superior Granite joined the panel on day one, while Mike Drumright of Artistic Marble & Granite participated on day two.

The first session kicked off by asking participants how they are currently templating their jobs. Only 19% responded to using manual templates, while 35% rely on digital templates. A total of 46% of respondents said they use a combination of manual and digital templates.

It was discussed how manual templating is usually done with Luan plywood and can take between an hour and two hours for a 50- to 60-square-foot kitchen. Jobs that are more complex can take even longer. Storage also has to be considered when templating manually. Wooden templates are bulky and take up space, as well as requiring vans or trucks to transport them.

Hoffman explained that digital templating requires 30 to 45 minutes, on average, which significantly saves time. Meriaux pointed out that the price of wood has skyrocketed across the country, so stick templates have become more of an expense. 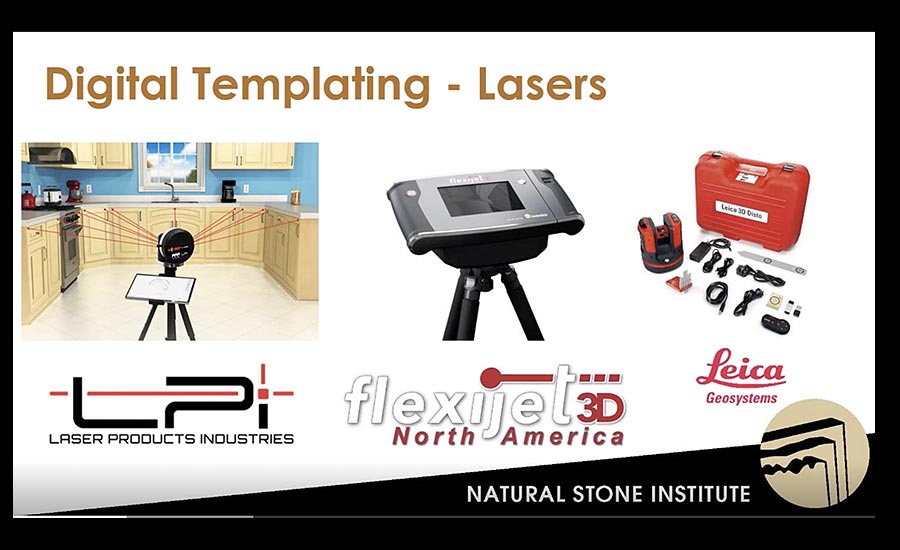 Traits of a qualified templator

During the first day’s session, the panel took time to discuss what qualities make for a great templator. Key traits include:

“On the employee side, you are all struggling to find good people,” said Meriaux. “You want to retain good employees. You might have a great installer who wants to make sure they have a job down the line. Maybe they are getting older and don’t want to install anymore and carry heavy material. Maybe they would make a great templator.”

Mann of Flexijet said that while the list of traits for a good templator might seem overwhelming, most people can learn. Chapman of Creative Stone Accessories shared similar thoughts as Mann. “You want someone that has the basics and can see through a problem,” he said. “I have learned lasers and I have learned CAD. If I can do it, anyone can.”

The panelists emphasized that it is important to define a process – to have a checklist. “I have a couple of guys who go out with me and I try to pass [my process] along,” said Chapman. “Ours is running a process from consistency – from templating to production files to cutting. I don’t have a formal process, but we have set a pattern.”

Mann explained that a great templator can be a leader in setting up these processes. “Create a process that is rewardable. Do you have a reward system for templators upselling to customers?

It can be as simple as, ‘Your sink doesn’t fit but our company stocks this sink that would work.’ This is not only rewarding, but can be efficient too.”

Meriaux pointed out that rewards can be just doing the job correctly. “Reward an employee that goes 90 days without any errors,” he said. “Set those goals. It keeps everyone striving to be better.”

Harris of Prodim explained that they include on-site training or web-based training to fabricators who purchase a Proliner. “We want to make you successful with digital templating, so we give as much training as required,” he said.

Mann explained that Flexijet gets them started on software before the machine even gets to them. “The point is not to be afraid,” he said. “It’s just another tool. We start people with remote training on the software so then when we come out [to their shop] we are showing them how to get even more out of this.”

Laser Products Industries offers a 30-day trial of its software, according to Hoffman. “We learn that is the scariest part of it,” he said. “Once they understand that, we start remote training. Normally, we go onsite training one or two days. We will go out with them on jobs they have ready for the field. We also have corporate web training at the office as well.”

The question was posed: “Do you need a programmer or can a templator perform the programming?”

“A lot of these templating systems have the capabilities to program,” said Hoffman. “The answer depends on the size of the company.”

“I did all of the programming up until a few months ago,” said Chapman. “I recently hired a guy with 10 years of experience. I’m taking good photos with the Flexijet, and he cleans them up and gets them ready for production.”

“Our Flexijet software is CAD,” said Mann. “It’s no problem to go from our system to CAD software to a saw. DXF is the most commonly used format. Generally speaking, if you have CAD software that will export DXF that should be fairly universal software.” 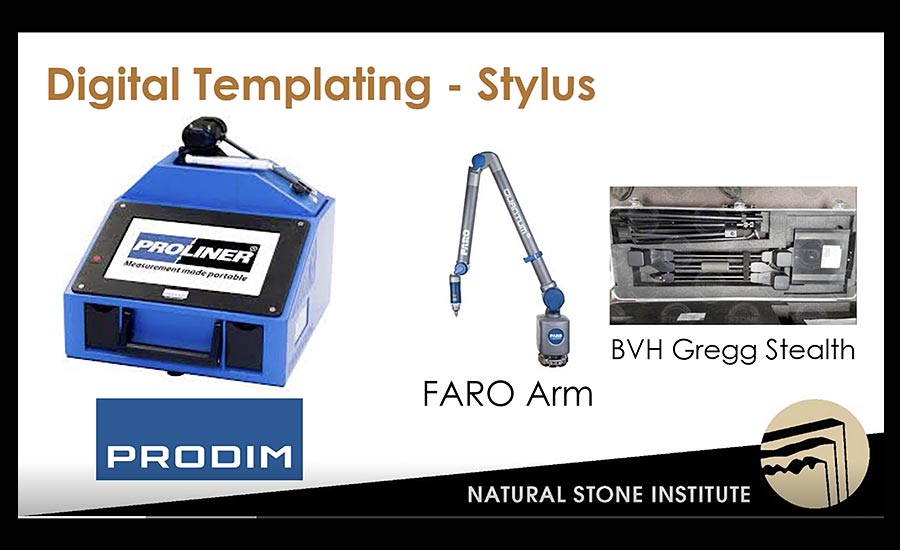 It was reiterated that digital templating systems result in a more efficient operation. “I have seen guys who are doing manual templates doing one to three a day, taking two to three hours,” said Hoffman. “With digital, you can do four to six in a half hour each. You can send those files over and the miscommunications aren’t there. You can email transferring files right away. For complex projects, we shine the most. It could take three or four hours to template, and we are doing it in an hour. It’s eco-friendly and we are using less materials.”

Drumright of Artistic Marble & Granite, who joined the panel on day two, also shared his experiences. “All I know is that when we went from a manual saw to a digital saw, from manual templates to a digital system, I could cut more slabs in a day,” he said. “It’s a great system for all of these things, and those are just added benefits.”

Drumright explained that he went to look at the system before purchasing it. When templating manually, the company could cut two to four slabs a day, depending on the complexity. “We made the decision to go to a digital saw and templating when we were ready for growth,” he said. “I wasn’t going to miss the sticks, but I was nervous about it. We transitioned in one day. We went all in and I don’t regret that for a minute. I’m not saying we didn’t have [some problems], but we would have meetings with the programmer and templator.”

He went on to say that they upgraded to ones with a tablet that has a WiFi connection, which allow template programs to be automatically downloaded and sent out to the customer and builder. “Once I get the drawing to the builder or customer, whether they opened it or not, it puts more on them,” explained Drumright. “It used to feel like we lose every time [there’s a problem], but now they can see it and I’m not making an island for free.”

Chapman said that he chose a digital system to get more projects templated in a day in the field. All of our projects are in close proximity so I can get three houses in a day,” he said. “We are fortunate that most of our work is in two areas -- all within 45 minutes. We were all manual. Now there is no more wood or glue.”

When asked, “When is a good time to consider digital templating?” Hoffman said that he believes it is inevitable. “When I started [in this business], there were less than 40% [using digital templating systems]. Now there are many more.”

Volume and the type of work being completed, determines if a digital templating system would be beneficial, Hoffman went on to explain. “I look at if your templator is doing 200 to 300 square feet a day, [it might be time],” he said. “[Fabricators doing] eight to 10 kitchens a week are the guys who we would start ‘dancing’ with.”