On August 23, 2013, OSHA released its proposed silica rule -- cutting the exposure limit formula in half -- and a 90-day comment period has been established. We encourage members of the natural stone industry -- particularly those who quarry or process stone -- to review this rule.  To read about the rule, visit https://www.osha.gov/silica/. The "Public Participation" tab allows for commentary on the proposed rule. 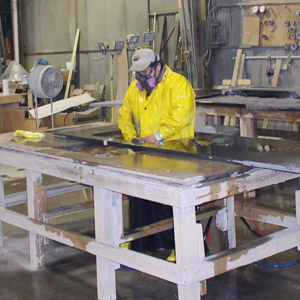 OSHA's official "Notice of Proposed Rulemaking," a 757-page document, can be found at https://www.osha.gov/silica/nprm.pdf. It reads, in part, as follows:

This document proposes a new permissible exposure limit, calculated as an eight-hour, time-weighted average, of 50 micrograms of respirable crystalline silica per cubic meter of air.

OSHA also proposes other ancillary provisions for employee protection such as preferred methods for controlling exposure, respiratory protection, medical surveillance, hazard communication and recordkeeping. OSHA is proposing two separate regulatory texts -- one for general industry and maritime, and the other for construction -- in order to tailor requirements to the circumstances found in these sectors.

In particular, the granite/stone industry is among those being targeted by OSHA, according to the document:

Based on its review, OSHA preliminarily concludes that the human data summarized in this section provides ample evidence that exposure to respirable crystalline silica increases the risk of lung cancer among workers. The strongest evidence comes from the worldwide cohort and case-control studies reporting excess lung cancer mortality among workers exposed to respirable crystalline silica dust as quartz in various industrial sectors, including the granite/stone quarrying and processing, industrial sand, mining and pottery and ceramic industries, as well as to cristobalite in diatomaceous earth and refractory brick industries.

The report cites a number of specific studies -- including ones conducted on granite industry workers in the U.S., Canada and Europe -- as supporting evidence for its proposal.

Also of note, the report indicated that simply operating a "wet shop" does not place a stone fabricator in compliance for shifts lasting more than four hours:

Information available to the Agency suggests that overexposures still occur when using wet methods and that there are additional challenges such as limited applications. OSHA has decided to include this control strategy based on the use of water systems on similar tools used in the cut stone and stone products manufacturing industry that have shown a reduction of exposures to well below 100 μg/m3 (OSHA 3362-05). The Agency believes that similar reductions can be achieved for grinding operations because the amount of respirable dust produced in these operations is comparable. Based on this inference, OSHA believes that wet methods alone will provide sufficient protection for shifts lasting four hours or less and is proposing to require the use of half-mask respirators with an APF of 10 for shifts lasting more than four hours.

(Editor's Note: It is important to point out that OSHA's data only lists a total of 1,943 companies classified as "Cut stone and stone product manufacturing" by the U.S. Census Bureau, a figure that is not even one-fifth of the actual total of stone fabricators estimated to be in the U.S. As such, all of the cost estimates listed by OSHA -- particularly industry-wide totals -- will likely be inconsistent with actual costs.)

Based on OSHA's (underestimated) total of 1,943 companies being affected by the new legislation, the report states that the U.S. stone-processing industry faces an annual cost of just over $8.6 million to be in compliance with the new regulations. Of this $8.6 million, OSHA states that the bulk of it ($5.89 million) would be for "engineering controls" within an operation, with another $1.83 million going towards exposure assessment and other funds going towards respirators, medical surveillance, establishing regulated areas and training.

According to OSHA's figures, the average annual costs for a company classified as "Cut stone and stone product manufacturing" would be $4,426, but this data is based on an overall industry-wide average and is not based on company size. OSHA estimates that individual companies in this category have an average revenue total of $1.9 million, with a profit rate of 5.49%. Thus, compliance would cost 0.23% of revenue and 4.2% of profit.

As for the size of individual operations, the U.S. Census Bureau classifies companies in the stone-related category with less than 500 employees as "small entities." Given the typical makeup of a stoneworking firm, the vast majority of companies fall into this category, with 1,874 of the 1,943 companies (96.45%) having less than 500 employees. Overall, "small entities" are reported to have an average revenue total of $1.73 million and the same profit rate of 5.49%, and they would see slightly lower annual compliance costs of $4,284 -- 0.25% of revenue and 4.51% of profit.

However, while 1,874 stoneworking companies have been classified as "small entities," the OSHA report released on August 23 further classifies any businesses with less than 20 employees as "very small entities" -- adding more complication to the overall compliance-cost data that has been released. A total of 1,471 companies (75.7%) fall into the "very small" category. These stoneworking operations show annual revenue of $946,566, according to OSHA, and run at the same overall profit level of 5.49%. For these companies, OSHA estimates annual compliance costs to be $1,872 per year, representing 0.20% of revenue and 3.6% of profit.

Already, the major stone-related trade associations have taken action on OSHA's initiative. "BSI expects that the Mason Contractors Association (MCAA) is going to be proactive in this comment period, as likely will the Natural Stone Council (NSC) as a united voice of our industry," reads a statement from the Building Stone Institute.

Moreover, the Marble Institute of America (MIA) has reiterated that over the years, it has produced a number of training guides about silica, which will be reposted onto one page for easy viewing on its website -- www.marble-institute.com/silica. They invite all stone groups to utilize the following as education and awareness resources:

"It cannot be said too often, protecting the workplace and employees from respirable crystalline silica should be an important objective of all stone companies," said Jim Hieb, Executive Vice President of the MIA. "Whether you feel that the current exposure limits are sufficient or not, all stone companies should take notice that OSHA will increase their enforcement outreach during the upcoming months. So utilize this time to not only review current silica exposure measurements, but also take a look at your overall safety procedures and training requirements. Utilize the resources of the MIA and other NSC-member associations, as well as training being offered at StonExpo/Marmomacc Americas."

The August 23 statement from Dr. David Michaels, Assistant Secretary of Labor, reads, in part, as follows:

I am pleased to announce today that OSHA is issuing a proposed rule aimed at curbing silicosis -- an incurable and progressive disease -- lung cancer, chronic obstructive pulmonary disease and kidney disease in American workers. The proposal seeks to lower worker exposure to crystalline silica, a deadly dust which needlessly kills hundreds of workers and sickens thousands more each year.

OSHA's objective is to develop a standard that not only protects workers, but also makes sense in the workplace. In this process, we especially hope to hear from workers and employers who have experience protecting workers from silica-related diseases.

Exposure to silica dust can be extremely hazardous, and limiting that exposure is essential. Every year, affected workers not only lose their ability to work, but also to breathe. OSHA estimates that the proposed rule will save nearly 700 lives per year and prevent 1,600 new cases of silicosis annually, once the full effects of the rule are realized.

Exposure to airborne silica dust occurs in operations involving cutting, sawing, drilling, and crushing of concrete, brick, block and other stone products and in operations using sand products, such as in glass manufacturing, foundries and sand blasting.

We know how to lower silica exposure. Today, many employers across the country apply common sense, inexpensive and effective control measures that protect workers' lives and lungs -- like keeping the material wet so dust doesn't become airborne, or using a vacuum to collect dust at the point where it is created before workers can inhale it. Tools that include these controls are readily available, and the rule is designed to give employers flexibility in selecting ways to meet the new standard.

This proposal is long overdue. OSHA's current standards for protecting workers from silica exposure are dangerously out-of-date and do not adequately protect worker health. The current standards are more than 40 years old, and they are based on research from the 1960's and even earlier. They do not reflect the most recent scientific evidence.

Since our current silica standards were issued in 1971, numerous studies have found increased risk of lung cancer among silica-exposed workers. The U.S. National Toxicology Program, the International Agency for Research on Cancer and the National Institute for Occupational Safety and Health have all identified respirable silica as a human carcinogen -- a cause of lung cancer in workers exposed to the dust. This proposed rule brings worker protections into the 21st century.

The proposed rulemaking includes two separate standards -- one for general industry and maritime employment, and one for construction. These standards are based on extensive review of scientific and technical evidence, consideration of current industry consensus standards and outreach by OSHA to stakeholders, including public stakeholder meetings, conferences and meetings with employer and employee organizations.

I am asking stakeholders to participate in this rulemaking effort, to help us develop effective solutions that will protect workers."

To provide the public with additional information about the proposal and ways to prevent silica-related disease, we have created a website which you can find by going to www.osha.gov/silica. The website includes five fact sheets that explain our proposals as well as the process for participating in the rulemaking. It also has a link to OSHA's new "Deadly Dust" video about the tragic effects of silicosis and the readily available methods to limit worker's exposure to silica.

To further demonstrate the historic commitment of the U.S. Department of Labor to preventing silicosis, we have also included a video entitled, "Stop Silicosis," featuring a former Secretary of Labor -- in this case Frances Perkins, who was President Franklin Roosevelt's Labor Secretary. The video was made in 1938.

It is 75 years since Frances Perkins committed the Department of Labor to ending silicosis in the U.S. This proposal is an important step forward in fulfilling this commitment.

Final Rule from OSHA on Silica