Marmo+Mac sets a new record attendance with their fresh brand and increase in exhibitors and exhibitor space.

Celebrating its 51st anniversary in Verona, Italy, this past fall, Marmo+Mac broke numbers in terms of exhibitors and attendees. The 2016 edition, which was held from September 28 to October 1, has proven it is the strongest and most-renown international stone exhibition.

“The 51st edition set new records, starting off with +10% of exhibitors for a total of more than 1,650 companies from 53 countries, and 67,000 attendees arriving from 146 countries,” said Maurizio Danese, president of Veronafiere. “The show covers the entire value chain, combining products, machinery and culture in a unique event with a strong history that continues to evolve, as evidenced by the new Marmo+Mac brand summarizing our identity while equally looking to the future.”

Success came in the shape of a sold out exhibition center, with all 12 halls and outside areas occupied, for a total show area of more than 80,000 square meters (+4% over the 2015 exhibition). “Marmo+Mac is today the b2b and promotion platform for the sector thanks to more internationalization than ever,” said Giovanni Mantovani, CEO and director general of Veronafiere. “International visitors attending this edition of the show increased by 5%. We achieved marvelous confirmation from markets such as the U.S., Germany and Spain, not to mention the astonishing 45% increase for Chinese participants, and an equally significant increase of 11% from Great Britain.”

Attendance figures also include more than 300 new international top-buyers and architects selected as members of official trade delegations arriving from 32 countries, with debuts from Nigeria and Mozambique. This is due to Veronafiere’s continuous investment in incoming activities, in collaboration with the Ministry of Economic Development, ICE-Italian Trade Agency, Confindustria Marmomacchine and, for the first time, the Veneto Region, through Veneto Promozione.

This year a new marketing and rebranding strategy was launched. Among the reasons cited by VeronaFiere for the revamped image are “the breadth and scope of the trade sector represented — from products through to technologies and design — to the international status of the event that goes far beyond the annual show thanks to ceaseless promotional activities in major target countries highlighting a strategic ‘Made in Italy’ sector even for other industrial operations.” Additionally, the commitment to university training was also behind the change.

The new branding included the insertion of a graphic mark, “+,” between “Marmo” and “Mac” to highlight all the more that the Marmo+Mac exhibition represents a multi-faceted industry embracing business realities flanked by other in-depth analytical topics.

The four days of the trade fair not only hosted business, but also paid close attention to initiatives and events dedicated to the world of design and training. Moreover, it offered a host of new innovations — both on the machine and stone sides.

“The Italian Stone Theatre” — a Hall set up with the contribution of the special Made in Promotion Plan — showcased the interaction of stone, design and technology, while the International Stone Summit saw the main worldwide trade associations take stock of the natural stone sector, its future development and the relationship with the ceramic industry.

The Italian Stone Theater was put in place by Marmo+Mac with support of the Ministry for Economic Development (MISE), ICE-Italian Trade Agency and Confindustria Marmomacchine within the scope of the special “Made in Italy” promotion plan. The hall was dedicated to Italian excellence in the natural stone and related technology fields, and this year included Ristorante d’Autore. The title of this project, “Journey to the Centre of the Earth,” was inspired by the famous story by Jules Verne about a fantastic journey into the depths of the planet.

Similarly, the project by ADI Delegation Veneto Trentino Alto Adige (Alessandro Barison, Cristian Dal Bianco, Tommaso Gentile, Silvia Sandini and Carlo Trevisani) seeks to be a symbolic journey into the world of marble to discover the geometry of the material and observe its molecular structure and the colors of its crystals under the microscope; an imaginative journey where creativity translates into new stimuli and new experiments.

The entrance to the restaurant — featuring material from Marmo Zandobbio of Cava di Zandobbio Bergamo and stone fabrication from Remuzzi Marmi Bergamo — was staged as the “entrance to the volcano,” an intimate yet colorful setting, with visual cones pointing into the unknown to stimulate exploration of the world of design and food; a place where natural stone and food can dialogue in a stimulating setting giving life to a perfect and unforgettable symphony of flavors.

Open to everyone attending the trade fair, Ristorante d’Autore welcomed the cuisine of four star chefs — Enrico Bartolini of Mudec Restaurant in Milan, Beppe Maffioli of Carlo Magno Restaurant in Collebeato – BS, Andrea Tonola of Lanterna Verde Restaurant in Villa di Chiavenna – SO, and Stefano Cerveni of Due Colombe Restaurant in Borgonato di Cortefranca – BS — who took turns over the four days of the show with “tasting menus” served in this extraordinary setting; dishes were paired with wines by Tommasi Family Estates, an historic producer in the Valpolicella Classica area today active with owned estates in five regions of Italy.

Keeping up with tradition, the Stone Industry Leadership Reception was hosted by Stone World, the MIA+BSI Natural Stone Institute, The International Surface event (TISE) and Architectural Record, also owned by Stone World’s parent company, BNP Media. The event was held at the bar in the Stone Theatre and drew quite a crowd. It featured wine tasting from the local region, which was supplied by Valentina Cubi winery.

The 10th Best Communicator Award presentation was one of the highlights during Marmo+Mac 2016. The awards represent exhibition booths that become full-scale works of art and design to narrate the materials and technologies involved in the world of natural stone. Marmomacc rewards research efforts and originality applied to exhibits by companies attending the Veronafiere event. The jury — comprising Marco Romanelli, architect and president of the Jury; Laura Andreini, deputy director of area; Alberto Biagetti, designer; Giovanni De Sandre, photographer; and Silvia Robertazzi, founder and curator of the Milan Design Film Festival — after careful consideration of all stand set-ups at Marmomacc chose those which best expressed the guiding values and philosophy of companies through the originality of their exhibits.

The Italian Stone Theatre in the Forum Area was the venue for the award ceremony held on Thursday, September 29.

The ceremony was also the occasion for the Master of Stone Awards. The origins of the Award date back to 1319 when, under the rule of Cangrande I della Scala, Verona saw the creation of the Ancient Free Corporation of Stone Arts. In 1980, a group of producers and entrepreneurs active in the marble industry in Sant’Ambrogio di Valpolicella — during the International Marble Exhibition — re-founded the Ancient Corporation and, in the same year, Marmomacc set up the award for people who, in the course of their activities, helped ensure prestige for the entire natural stone industry and the economy of the local area.

Masters of Stone insignia were awarded this year to the mayors of Italy’s leading natural stone processing districts: Flavio Tosi for Verona and Angelo Zubbani for Carrara. They were joined in turn by Fernando Leardini, owner of Intermarmi S.R.L. based in Volargne (Verona) and Mahmoud Sarsali of the historical Iranian company Salsali Marble. A special and extraordinary mention also went to the Istituto Paolo Brenzoni-Marble Vocational Training Centre in Sant’Ambrogio di Valpolicella.

In the “Design” category of the Best Communicator Awards, First Prize Italy went to Piba Marmi for its stand designed by Go Hasegawa. 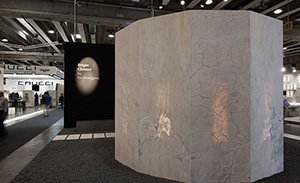 Jury Comment: A polygonal micro architecture, church, chapel, cell or molecule, but also a possible spatial module where marble becomes a thin skin that sometimes lets light through to hint at other presences. 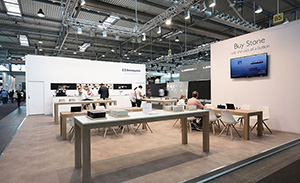 Jury Comment: A new exhibition approach in this sector, inspired by the world of technology, exploiting its space and language, freeing itself from the weight of stone effectively on show here through small samples.

Special Mention went to Laminam and its stand designed by the company’s art director Alessandra Stefani. 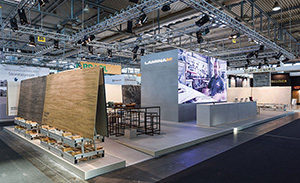 Jury Comment: An immediately appealing set-up even from the outside which defines interior space in a harmonious and stylistically consistent manner. The video wall, furnishings and slabs highlighting different textures convey dynamism and strong contemporaneity.

For “Stone,” First Prize Italy was presented to Marmo Elite for its stand by architect Enrico Toso. 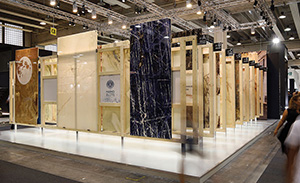 Jury Comment: Its deliberately labyrinthine configuration which, on one side, highlights slab transport systems, while the other has a kind of exhibition of paintings on easels to provide a close-up view of the materials. 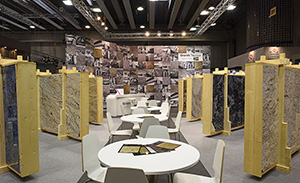 Jury Comment: The essential layout of its stand incorporating stimulating sensations, starting with the methods used to transport large slabs through to a high-impact graphic collage.

Special Mention was awarded to Kamen Pazin from Croatia with its stand designed by architect Sandra Krebel. 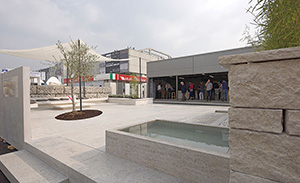 Jury Comment: Configuration of an outdoor space where material and nature blend harmoniously together to create an original and varied landscape highlighting a huge variety of finishes.

First prize Italy in the “Machine” category was presented to Barsanti Macchine. 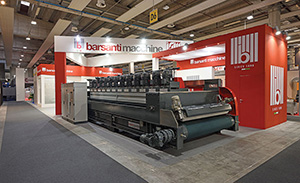 Jury Comment: The overall impact of the stand, which effectively integrates with the product through a detailed and functional structure.

Koenig from Germany was honored with First Prize International with its stand by designer Clemens Beck. 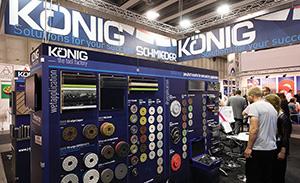 Jury Comment: A clear and immediately comprehensible exhibit. The tool factory focuses on the environment in a workshop and suggests an exhibition order of extreme functionality. Cobalt blue, the brand’s distinctive color, conveys energy and, at the same time, elegance.

Special Mention was given to Prometec for its stand designed by architect Giovanni Giorgi. 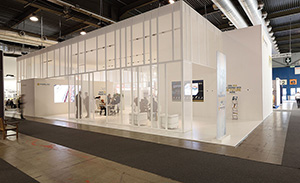 Jury Comment: A concept enclosed in an exhibition space where work tools become exhibition design items. The essential white cube recalls a block of marble defined by the delicate technical fabrics the company uses in its processing operations.

The First Prize Italy in the “Tools” category went to Sorma.

Jury Comment: The iconic impact of its graphics and the precision design of the display cases.

Special Mention was presented to Sanwakenma from Japan. 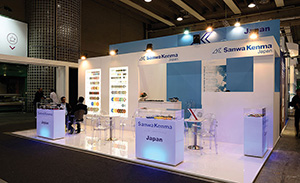 Jury Comment: The straightforward yet effective representation of the product backed up by streamlined graphic communication.