Encouraging signs in Brazil and China

By Alex Bachrach
The last month has certainly been a busy one. At the end of January, most of the industry headed to Las Vegas forStonExpoandSurfaces(now part of the larger exhibition referred to as the International Surfaces Event).  It was a great start to the year, as the show was robust and one of the more successful shows for our industry here in years. 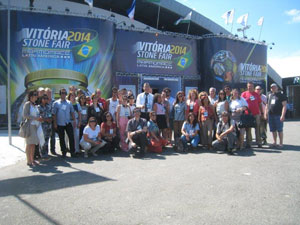 Then, after the shocking and untimely passing of our long-time editor, Michael Reis, at the beginning of February, our staff had to put magazines together without our editorial leader. I am proud of our staff's ability to move forward, especially Jennifer Adams, who has her work cut for her, but has been managing everything better than I could have imagined.

During this busy time, I went on to two countries, Brazil and China, in three weeks. And I can honestly say, I was both reassured and pleasantly surprised by much of what I saw overseas.

In Vitória, Brazil, this year's edition of the annual event that has become one of the most important of its kind in the world, was the first since the rebranding of the show to Vitoria Stone Fair/Marmomacc Latin America.Following the positive trends our industry has been seeing for the last year or more, the Vitória Stone Show was definitely a successful event and picked up where last year's show left off (2013's event was the best the show had seen for several years).

Almost every exhibitor I spoke with was pleased with the results and thought that the market was finally in a consistent growth pattern, albeit still only moderate growth, which is probably more sustainable anyway.  I wouldn't say traffic was the best it's ever been, but people were selling and the activity seemed real and measureable, and again, everyone was pleased with the results they were achieving. The Vitoria Stone Fair/Marmomacc Latin America has always been one of my favorite shows because while it includes pretty much a "who's who" of factories and quarries in Brazil, it is a manageable show and, well, it's in Brazil.

This year was the first time that Marmomacc brought their successful and popular architectural study tour to Brazil, and it was a well-organized, educational and fun event for the architects who attended. Architects visited a quarry owned and operated by Marbrasa, and they saw a range of fabrication capabilities at factories including Vitoria Stone Co., Antolini do Brasil, Brasigran, and Zanet do Brasil. A full report on the seminars and the fair itself will be coming out soon.  This study tour is modeled after the successful program that has been offered in Italy for 15 years, and which Stone World has sponsored since its inception.

A week after returning from Brazil, I left for Xiamen, China, for an eye-opening experience.  The Xiamen International Stone Fair is held annually in March in Xiamen, a young coastal city with growing infrastructure and a large exhibition center, and the organizers of the event started catering to the growing international segment of their show with a seminar program that included known industry speakers. Overall, the show was packed with attendees and the international hall was filled with exhibitors from every country -- from the U.S. to Europe, Brazil, India and all of Asia. Interestingly, the people in the halls were not a parade of strangers. I saw familiar faces everywhere, and it didn't seem like it was my first time there. No doubt, everyone who was telling me we needed to check this show out were right, and some great friends showed me around town and made sure the entire week was a successful and fun trip.

Not everything was perfect -- at the fair, it is almost impossible to grab a taxi in any organized manner at all, and outside of the fantastic Churrascaria tent provided by Abirochas and the Brazilan pavilion for its members and customers, food options are limited. But I know Stone World will be present at this show annually in the future. Again, look for our full report shortly.

Now, I try to catch up on all the work I neglected while traveling and work towards the next big industry event -- Coverings in Las Vegas. I am sure I will see many old friends and new things there as well, and hopefully the majority will still be talking about the positive trends in our industry and how we can learn from each other and work together to keep the trends moving in that direction. It's trade show season, so come see Stone World’s staff at any upcoming event and let us know what you're seeing out there.

Alex Bachrach is publisher of Stone World magazine.
You must login or register in order to post a comment.