This website requires certain cookies to work and uses other cookies to help you have the best experience. By visiting this website, certain cookies have already been set, which you may delete and block. By closing this message or continuing to use our site, you agree to the use of cookies. Visit our updated privacy and cookie policy to learn more.
Home » Machine of the Month: K725 5 Axis CNC Bridge Saw Series
Product of the Month

KEYWORDS bridge saws / countertops
Order Reprints
No Comments
Sasso USA introduces the K725 5 Axis CNC Bridge Saw Series, which takes versatility to a new plane of performance with practicality in countertop and dimensional stone applications. Touch Screen CNC interface allows easy file data and sink .dxf entry, and programming can be accomplished at the machine or offline with CadCam programing being sent to the machine via either network or WiFi. Thebridge sawhas integrated flexible monitor mounting and a rail that also pivots to allow maximum access to the control while viewing the machine operations. 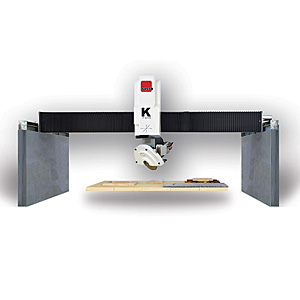 Software for cutting all types of countertop and architectural details included allows maximum ability for the machine no matter the requirement.

The K725 Saw utilizes blades ranging from 14 to 24 inches in diameter couple to a powerful 25 horsepower electrospindle. Combining an ISO 40 Quick Change Toolholder on the end of the spindle allows rotary tools such as finger bits to be utilized for cutting and carving operations.

The Sasso K725 has a unique ability to utilize SassoPlunge, allowing the saw the ability to reduce the trail-out of the saw cuts. Typically cuts like this are only accomplished using a combination machine, but the K725 cuts nested parts with ease in nominal time. Offering significantly lower startup, operational and maintenance costs than combination waterjet/saw machines, the K725 offers more automation for more shops.

Combine the above features with rugged hot galvanized construction and the K725 will bring years of service to its owner.

Sasso USA also offers an optional CameraView System allowing easy slab photographs to be generated right at the machine with layout taking place just prior to the cutting operations in a nominal amount of time.