With 59% of the votes, Joey Marcella of Mario & Son in Liberty Lake, WA, was our readers’ favorite for the 2018 Stone World Fabricator of the Year. Marcella was one of four deserving candidates who were nominated.

The Stone World Fabricator of the Year Award is a long-time tradition which began when Jim Stengel of Dakota Granite Co. was honored in 1988. Forward 30 years later, and Stone World has a lineup of outstanding industry members who have been recognized each year for their leadership, dedication and innovation. 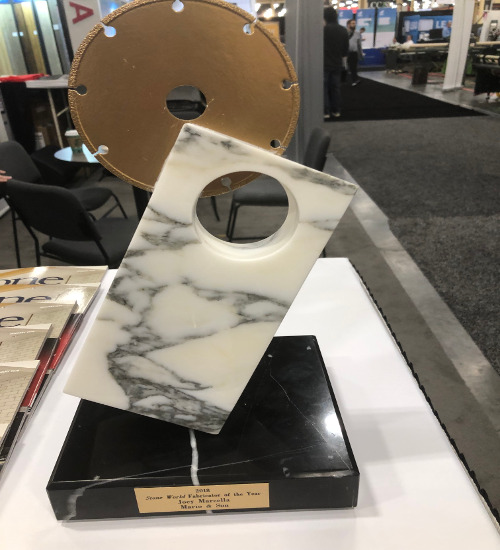 Those who have received the award, as well as the other worthy candidates who were nominated, have all set an example by having a willingness to either educate by sitting on educational panels at various trade shows and other events or have opened their shops up to their peers to share ideas and experiences – all for the better of our industry.

As in years past, nominations were received from leading machinery and tooling and accessories manufacturers, as well as industry associations. Nominees were then listed on Stone World's website where readers had the opportunity to vote. Criteria for the award includes:

In addition to Marcella, the roster of nominees included:

The award was presented on Thursday, January 24th at the Mandalay Bay Convention Center in Las Vegas, NV, during StonExpo/Marmomacc Americas 2019, which is part of The International Surface Event (TISE). The awards presentation kicked off in front of a crowd at the start of the “block party” sponsored by the Natural Stone Council (NSC), as well as Stone World and the Natural Stone Institute.