Natural Stone Headstones: Not just for Halloween – or Humans

With Halloween right around the corner, millions of revelers have already filled their homes with plump jack-o-lanterns, strung up eerily glowing green and purple lights, and turned their front yards into spooky graveyards adorned with a mélange of ominous headstones. So, what exactly is the appeal in sprinkling tombstones all over the yard, and how did that tradition come to be? The answer lies in the origins of Halloween itself – ironically, a story most people are unfamiliar with, given such great admiration for the holiday.

Some 2,000 years ago, the ancient Celts celebrated the end of summer and start of the new year with a festival called Samhain (pronounced sow-in). According to their belief, the thin veil between the worlds of the living and the dead became obscured on October 31st each year, making it possible for the spirits of the departed to return to Earth. To ward off these roaming ghosts, villagers would don costumes and light bonfires. Originally referred to as All Hallows' Eve, this day eventually came to be known as Halloween. 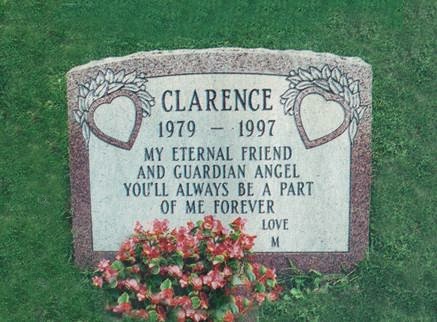 While the celebration has evolved over the centuries, headstones – including 'faux' reproductions of the stone grave markers found in cemeteries – remain an essential symbol and accessory for Halloween. Of course, in addition to being a sought after holiday decor item, headstones serve as a timeless memorial for loved ones who have passed on, including cherished pets.

In fact, people have been burying their furry friends dating back to the ancient Egyptians, who often mummified their animals. The burial tradition made its way to the U.S. in the late 19th century, and was quickly adopted by those wanting to honor their animal companions in a meaningful and lasting way – albeit, sans the mummification. 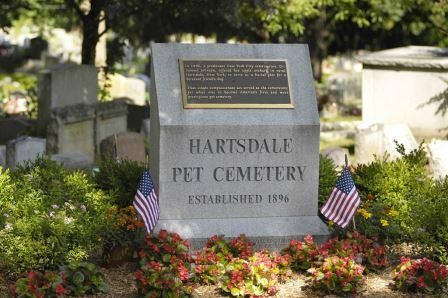 Established in Hartsdale, NY, in 1896, Hartsdale Pet Cemetery is the oldest pet cemetery in the U.S., and home to more than 80,000 pets, including Mariah Carey's beloved dog Clarence. Today, an estimated 600 pet burial grounds can be found across the country. However, unlike the menacing cemetery in Stephen King's bone-chilling novel, Pet Sematary, most of these locations are beautifully landscaped, peaceful and – well – not all that different from the final resting places created for humans.

Like those for their human counterparts, headstones and monuments for pets are typically made of natural stone – granite, in particular. Widely admired for its beauty and durability, granite's inherent toughness and ability to withstand the elements make it particularly well suited for use in outdoor settings such as cemeteries.

When it comes to producing granite monuments and memorials for pets (and humans), Elberton, GA, and Barre, VT, are highly regarded sources. The stone quarried from both areas is well known for its consistency in color and texture, as well as lack of impurities. Local artisans painstakingly craft each piece of granite – whether a simple engraved stone, a more intricate memorial featuring a laser-etched photo, or even a sculpture cast in a pet's likeness – to create works of art that will endure for many years to come.

As with all holidays, Halloween will pass in the blink of an eye. And, the decorations and headstones will be packed up and stored away for another year. In contrast to these temporary markers, however, "real" natural stone memorials can be visited all year round, providing lasting memories and a very personal way to honor our loved ones – whether human or non-human.

Selling craftsmanship, not just one

Xiamen Stone Fair not only increased in size, but expanded its events and seminars