By Jennifer Richinelli
Last week I joined the Stone Fabricator's Alliance (SFA) on its tour of Italy. A group of enthusiast fabricators and I hopped on a bus and covered a lot of ground while we were there -- 1,250 miles to be exact! From machinery and tooling manufacturers to stone producers and suppliers, we saw it all. Our hosts couldn't have been more gracious to show us around their facilities and answer all of our questions, and we owe a particularly big "thank you" to Tenax, who sponsored the trip and handled all of its scheduling. 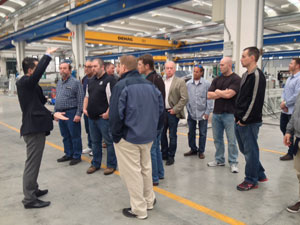 In addition to learning about each company's new developments, what was particularly interesting to me was observing the fabricators at each facility. They were like children in a candy shop. They were immediately drawn to what they were being shown. They would not only talk with our hosts about specific pieces of machinery or products, but it also sparked conversations among themselves.

We had the opportunity to get to know each other pretty well during our long bus rides, and while it also presented a chance to catch up on some sleep, most members of the group seldom did. They never seemed to be at a loss for things to talk about. They discussed everything from machinery and labor issues to how often they order boots and aprons for their employees. It made me realize what a tight group the SFA has formed, and how its members have embraced its philosophy of supporting one another and sharing ideas.

A trip such as this also provided an opportunity for the fabricators to form relationships with the Italian manufacturers that we visited. Every company that we stopped at was very interested to hear the fabricators' thoughts on their machinery or products. They also welcomed to hear any issues that they might be dealing with, which would help them develop products in the future that can solve these problems.

Another positive that I took away from this trip is that it seems business is picking up. Most of the fabricators in our group talked about how busy work has been lately, and many are planning to purchase machinery within the next few years -- if not right away. Some were also talking about expansion of their facilities -- all positive signs that the economy in the U.S. is improving.

To reconfirm this, many of the machinery manufacturers that we visited also expressed that they are seeing positive signs of growth. "We are very confident that 2014 will be a good year," said Alberto Schiavo, Area Manager for Intermac. "I don't know if it is just the feeling of the people that is good or that the economy is improving, but we feel it is all a very good sign."

By the time this edition of the Stone World Fabricator eNewsletter is out, I will have also attended a MIA/Stone World Educational Seminar, which is taking place not far from our office in New Jersey. There I will have the opportunity to talk with more fabricators. Hopefully, they will also have good news to share about their business and the economy. I look forward to telling you more about it in our next edition.