It's in the details

By Jennifer Richinelli
While every project is unique, there are sometimes ones that really illustrate the detail and craftsmanship that went into the job. This was definitely the case in this edition's Project Spotlight, "Capturing a twinkle with handmademosaics." For mosaic artist Michelle Griffoul, creating a mosaic mural of Lee Strasberg -- pioneer of the method acting approach -- for the outside of The Lee Strasberg Theatre & Film Institute in West Hollywood, CA, was truly a labor of love. 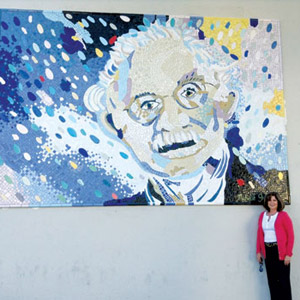 Griffoul was commissioned by Strasberg's son, David, who relayed that he wanted something to make the outside of their building reflect what they do and who they are. The honorary piece of art that was created was a 10 foot, 3 inch- x 15 foot, 3-inch porcelain mosaic mural of the mentor himself, which was made with handcrafted tile.

To make sure that the design would convey the right personality of Strasberg, Griffoul studied photographs of him and was inspired by a watercolor done by James Paul Brown that was in the acting school for many years.

"To capture the feeling that his son remembers of his father was the real challenge," explained Griffoul. "I made three different sets of eyes. After it was up on the wall -- all of it before grout except the eyes -- we taped each set of eyes up and then walked across the street to see what kind of feeling we saw from each set. The changes were very subtle close up, but from a distance they really communicated a different feeling. One was stern, one questioning and the one we settled on -- magical."

Behind every project there usually is a story. In this case, there was a level of dedication that went above and beyond to achieve just the right design for the mural.

If you have a story that you would like to share, don't hesitate to let us know. E-mail me at adamsj@bnpmedia.com -- I'd be happy to tell it.