Located right in the heart of New York City, just outside of Manhattan,Indo American Granitehas opened a new location in Long Island City, Queens, which is among the largest warehouses in New York City, comprising almost 1.5 acres of natural and artificial stones.

It all started in 2005 with a modest 100-square-foot trailer office and a 3,000-square-foot rental inside of a junk car yard in Ridgewood, Queens. From just one row of basic granite procured locally at that time, the company has grown to one of the largest distributors of natural stone in the city — over 200 colors. The latest additions to its inventory are engineered stone and glass slabs.

Material is imported from all parts of the world, such as Italy, Brazil, China, India, Spain, Turkey, etc., and it is stored and distributed to places as far away as Virginia. One long-term goal is to establish remote locations in North America and set up factories in at least three of the exporting countries to facilitate material acquisition, processing and self-export onward to North America.

To stay ahead of the curve, Indo American is investing heavily in capital expenditure on its indoor and outdoor facilities — including the installation of overhead cranes, which is currently underway. It is also continually expanding its fleet of trucks and manpower.

In addition to its current 2,400-square-foot office space on the first floor, the equally spacious second story is being renovated to create a new showroom for high-end designers and architects, which would be one of a kind in New York City. It is also being outfitted with a canteen for all its employees, along with a gymnasium. 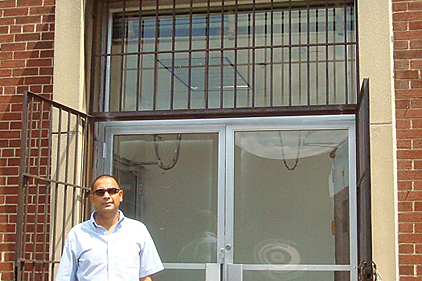 “The growth of the company could be largely attributed to the excellent teamwork, focus and 100% commitment of its key members,” explained Devraj N. Aiyar, who heads the company. One of Aiyar’s long-term goals is to create more job opportunities and provide a satisfying work environment.

His brother Garry joined the company in 2008 and gave a tremendous boost to the sales and played a pivotal role in its growth. Other key players are Sunny and Gaurav, who joined the company and are the heads of sales and operations, respectively. Aiyar’s wife Usha joined the team at the beginning of the summer, and she is already making a mark. Most of the employees of the company have come from other industries, and they have learned through time and experience.

Indo American delivers materials to destinations over 250 miles away, which is a testament to its commitment to customer service and competitiveness. The company prides itself on maintaining a steady stream of loyal customers by offering quality products and service. Aiyar also stressed that key ingredients to its success are maintaining a client base with strong credit and keeping close tabs on receivables.