While walking through the bustling exhibit hall at the Mandalay Bay Convention Center in Las Vegas, NV, during The International Surface Event (TISE), it was evident business is picking up for members of the stone industry. Momentum continued throughout the three-day exhibition, which was held from January 18 to 20, 2017. Busy booths, crowded aisles and long lines at the concession stands were all positive signs that good things are in store for the coming year.

TISE comprises Surfaces, StonExpo/Marmomacc Americas and TileExpo — making it North America’s largest floor covering, stone and tile industry event. The exhibition, which joined buyers and sellers from around the globe, featured approximately 700 exhibiting companies and a display of more than 1,000 products.

The show provided an opportunity for attendees and exhibitors alike to view the latest advances in technology, as well as network with industry members. The Stone World staff had many conversations with both exhibitors and visitors about new product launches, recently completed projects and potential leads for our Fabricator Case Study series. Additionally, we attended informative seminars such as the Fabricator Forum — part of the IGNITE educational program, which included more than 55 sessions, featuring the hottest topics and industry experts.

There were also many draws for attendees on the show floor during TISE 2017, including the “block party” sponsored by MIA+BSI and the Natural Stone Council (NSC). Stone World also presented its 2016 Fabricator of the Year Award to Scott Hanes of Majestic Marble and Granite of Orlando, FL, during this time.

Stone Boss of Fair Lawn, NJ, also attracted attendees to its booth with a raffle. Participants had the opportunity to win an Alpha Air 680, a Flex circular saw, Abaca carry clamps, a Terminator Bigfoot core bit and a Panther mystery giveaway.

Evening receptions were also a part of the festivities at TISE 2017. Both MIA+BSI and the SFA held events for its members, which drew quite a crowd. The receptions allowed association members to relax a little and socialize, while still networking and catching up with other industry professionals.

Scott Hanes is named Stone World Fabricator of the Year 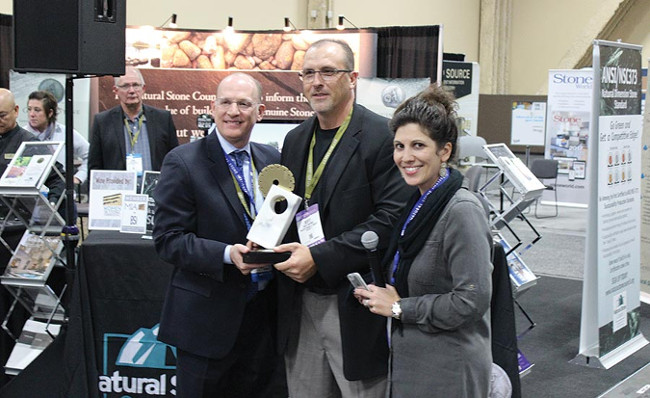 Stone World presented its annual Fabricator of the Year Award during StonExpo/Marmomacc Americas 2017, which took place at the Mandalay Convention Center in Las Vegas, NV, from January 18 to 20. The award was presented to Scott Hanes of Majestic Granite and Marble of Orlando, FL. (From left to right: Dave Madonia, Stone World publisher, Hanes, Jennifer Richinelli, Stone World editor)

For the first time, Stone World opened up voting for its annual Fabricator of the Year Award to its online audience and the decision was clear — Scott Hanes of Majestic Marble and Granite of Orlando, FL, was named the winner. The award was presented at StonExpo/Marmomacc Americas 2017 — part of The International Surface Event — which was held at the Mandalay Bay Convention Center in Las Vegas, NV, from January 18 to 20.

As in years past, nominations came from leading machinery and tooling and accessories manufacturers, as well as industry associations. Nominees were then listed on Stone World’s website where readers had the opportunity to vote.

Criteria for the award includes:

The nomination for Scott Hanes reads as follows:

In April 2007, Scott Hanes purchased Majestic Marble & Granite. Majestic primarily focused on cultured marble and outsourced their granite fabrication. The market crashed just months after the purchase. Scott was forced to re-evaluate his business and needed to make a change - and do it quick - in order to survive. He decided to solely focus on granite production and began fabricating stone with a Blue Ripper. As the market began to rebound, Scott soon realized how hard it was to keep up with business and invested in a bridge saw and edge machine. As the market continued to recover, he added a digital templater and CNC Saw/Jet in 2013. He was also an early adopter to embrace Moraware. Year after year, he has continued to invest in his business by adding technology which has enabled him to keep up with the growing market demands and has allowed him to expand into different markets. Scott has always volunteered and been engaged in industry events (TISE, Coverings, Stone Fabricator’s Alliance (SFA) workshops). In 2014, Scott hosted an SFA event at his shop so that others could learn more about his equipment and fabrication processes. In 2015, Scott presented at Coverings on how digital technology has transformed his business. For over five years, he has been a main presenter at the Digital Stoneworking Expo, sharing his company story and how digital technology has enabled him to grow and thrive in a very competitive market. His “open door” policy has resulted in 100+ guests visiting his shop to learn best practices within the industry. Scott is in the process of helping Moraware film the value and benefits of their software and recently participated in one of the Stone Talk forums. From touring busloads of fabricators through his shop to presenting various education seminars around the country, Scott Hanes is passionate about sharing his learnings. Scott’s commitment to innovation and willingness to share best practices showcases that his is the ideal fabricator to receive the 2016 Stone World “Fabricator of the Year Award.”

The current roster of winners of the Stone World Fabricator of the Year Award is as follows:

Fueled by a passion for stone