John Iberti passed away on July 12 at the age of 91. Born in New York on June 13, 1920, he graduated from CCNY with a degree in accounting and served 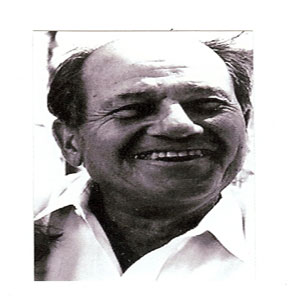 as a captain in the Army during WWII, seeing action during the invasion of Guadalcanal.

He was one of three brothers born to first-generation Italian immigrants, and was particularly proud of his Italian heritage. In1958, John moved his family to Glendale, CA, where he lived for a great deal of his life and where he met most of his lifelong friends. He was an avid golfer and member of the Oakmont CC in Glendale as well as PGA West CC in La Quinta. He was co-founder of Walker Zanger (WCL), a highly regarded importer and distributor of stone and ceramic tile, who supplied many famous projects such as the Getty Museum in Malibu as well as the Salk Institute, Kimball Art Museum and Bellagio Hotel. He served as President of Walker Zanger (WCL) from the early 1960s through his retirement in 1991.

He was instrumental in growing this company into one of the most highly recognized and respected in its field. John loved to travel and did so extensively both for business and pleasure and was fluent in several languages. He was an avid reader, particularly of history, and a great patron of the arts and local sports teams. At one time or another, he was a season ticket holder for the Ahmanson, the Dorothy Chandler Pavilion, the Greek Theater, the Hollywood Bowl, the Dodgers, the Lakers and the Kings. Growing up in the Bronx, John was very athletic and extremely competitive at sports. He was particularly fond of basketball and handball and spent countless hours on the courts in the schoolyard behind his house. One of John's most endearing qualities was his unfettered generosity. He gave unconditionally and was always ready to help those around him.

He was an optimist who was enthusiastic and excited about life and didn't spend much time looking in the rearview mirror. To his credit, he never said a bad word about anyone. He simply never gossiped or spoke ill of others. He was a person you could trust. He was endeared for his loyalty and wisdom. He pursued many interests and lived life on his terms. He's preceded in death by his youngest son, Dr. Thomas Iberti, and survived by his wife Hanny Bollee, sons Walter and Bill, daughters-in-law Sharon, Maria and Nancy and his grandchildren Jonathan, Pier, Colin, Elizabeth and Giulia.  Services for John were held at 11 a.m. on July 20 at The Little Church of the Flowers at Forest Lawn in Glendale. A celebration of his life was held immediately following services at Far Niente Restaurant in Glendale.