ALEXANDRIA, VA -- Next year, Coverings will celebrate its 25th anniversary from April 29 to May 2, 2014 at the Las Vegas Convention Center in Las Vegas, NV. The show will host an official anniversary "After-Hours" party on Wednesday, April 30 from 9 to 11 p.m. at a Las Vegas nightclub to honor this important milestone. The special event will feature an open bar, music, networking and reminiscing. Exhibitors and distributors can purchase up to 10 tickets to share with customers. Tickets are $60 each, and can be purchased upon show registration at www.coverings.com. Additionally, Coverings attendees will receive a 25th anniversary commemorative collectible at the show. 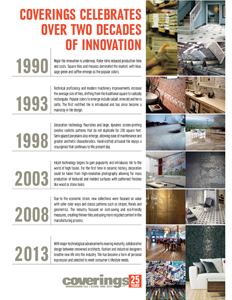 The first iteration of Coverings took place in 1990 in Anaheim, CA, when Tile Expo and The World Exposition of Ceramic Tile and Bathroom Furnishings merged -- creating The International Tile Exposition, which later became the International Tile and Stone Exhibition, and eventually Coverings. By all accounts the show was a huge achievement, met with enthusiasm and excitement from the first several hundred exhibitors. The inaugural show also accomplished something no one in the industry had been able to do -- unite five industry associations under one umbrella: The Ceramic Tile Distributor Association (CTDA),Tile of Spain/Spanish Ceramic Tile Manufacturer's Association  (ASCER),Ceramics of Italy/Confindustria Ceramica, National Tile Contractors Association (NTCA)and The Tile Council of North America (TCNA).